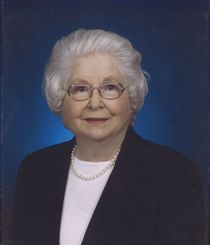 Ann Hopkins Gowen, 91, of Folkston, GA, passed away Sunday, June 11, 2016, in Jacksonville, FL.  She was born February 28, 1926, in Wayne County, GA, to the late Alva Joseph Hopkins, Sr. and Ethel Shepard Hopkins.  After the passing of her mother, she moved to Charlton County and was raised by Walter and Lula Hopkins.  She attended Wesleyan College before returning to Folkston.  She was an accomplished golfer winning several ladies tournaments and had three “Holes in One.”  She loved gardening, spending countless hours on growing roses.  She was a member of the Folkston United Methodist Church.
Along with her parents, she was preceded in death by her three brothers:  Alva J. Hopkins, Jr., Colquitt Dyal Hopkins and Alexander “Alec” Hopkins
and two nephews:  Gregory Gowen and Kenny Gowen.
She is survived by her husband of 69 years:  Harold Gowen; local nieces and nephews:  Deborah Hopkins Carter (Chuck), Joe Hopkins (Julie), Jimmy Dean Gowen (Ann), Sidney Gowen (Gloria), Mary Eve Blair (Leslie), Frances McDaniel (David), Rose Mary Kriner (Ken), Johnny Gowen (Debbie), Guy Gowen, Kay Rhoden (Timer) and Connie Spivey and a host of other nieces and nephews and other relatives.
A graveside funeral service will be held Wednesday, June 14 at 11:00 AM in Pineview Cemetery with Rev. Benji Varnell and Rev. Jack Varnell officiating.
Memorials may be made in Mrs. Gowen’s memory to Folkston United Methodist Church, 1463 Third Street, Folkston, GA 31537.
Condolences may be expressed by signing the guest registry at www.shepardfh.com.  Arrangements are under the direction of Shepard-Roberson Funeral Home in Folkston, GA.

To order memorial trees or send flowers to the family in memory of Ann Gowen, please visit our flower store.