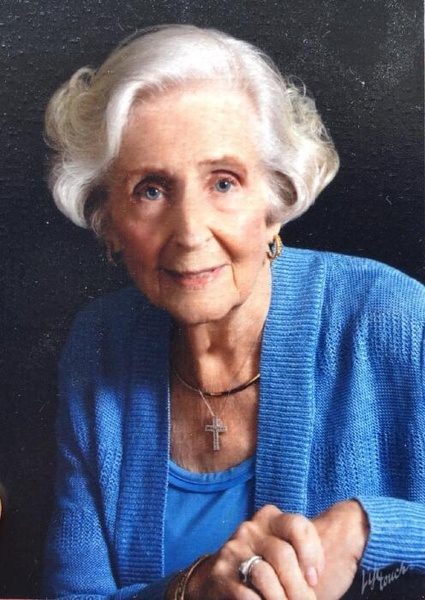 Anne attended Valdosta State College and the University of Georgia.   A natural beauty,  she was crowned “Miss Fernandina Beach” in 1948.  She moved to Folkston when she married Joe in 1949.  Their family expanded over the years into six children.  One of her favorite stories was when Steve as a three year old tore off all the labels of her canned vegetables.  For a good while after that, she shook the cans to guess what vegetable might be inside.   Dinner was quite the adventure for a period of time.

From her flower arranging abilities, to perfecting her pimento cheese and lemon chiffon cheesecake recipes, to sewing and knitting for herself as well as her daughters, Anne was quite adept at all things domestic.  She also loved her yard.  It was not uncommon to find her outside working or on the sofa recovering when “the bear almost got her”.  Her father, “Big Chief” grew prize winning camellias, several of which were transplanted to the yard at 116 Elm Street.  Also, she and Joe loved to entertain.  The  “Little House” will always bring back fond memories of snapper and quail dinners shared with neighbors and friends.

Raised as a Baptist, she joined the First Methodist Church of Folkston upon her marriage to Joe.  She remained active in the church throughout her life.  Her family is very thankful for the many relationships that grew from this church upbringing.

The family wishes to extend a special thank you to Shirley Reed for her care, devotion, and friendship to Anne, especially through the last years of declining health.

In lieu of flowers, the family requests donations be made to the First United Methodist Church of Folkston, Georgia.  A memorial service will be held at a later date.

To send flowers to the family in memory of Anne Jackson, please visit our flower store.