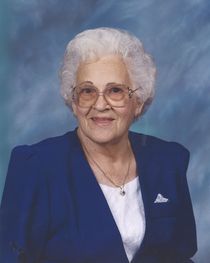 Bessie Blake VanZant, 93, of Hilliard passed away July 1, 2015.  Bessie was born in Kings Ferry, FL, on August 16, 1921 to Cordie and Bertha Higginbotham Blake.  She lived her life by the Golden Rule.

Bessie generally went wherever Harry went.  She became quite adept with a needle and created beautiful embroidery, tatting and crochet pieces as well as clothes for her children.  Bessie taught young children in Sunday School and served as Church Clerk for over 30 years at Ephesus Baptist Church.  She worked in the egg processing industry for 10 years after her children were grown.

Condolences may be expressed by signing the guest registry at www.shepardfh.com. Arrangements are under the direction of Shepard Funeral Home, Folkston, Georgia.

To order memorial trees or send flowers to the family in memory of Bessie Vanzant, please visit our flower store.