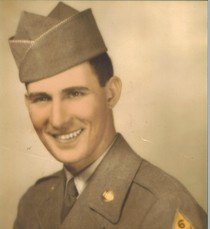 Bill Keith passed away peacefully surrounded by his family Feb.23, 2017. He was preceded in death by his wife, Janice Collins Keith, Granddaughter Michelle Johns Lee, second wife Annis Devlin Keith, sisters Juanita, Catherine, Audrey, Rethal and brothers Dewey, Charles, John and Claude.
Bill was born August 21, 1931 in Charleston, WV and served in the U.S. Army as a Sargent. He fought at the 30th Parallel during the Korean War. After the war he moved his family to Florida and was employed by Humphrey’s Mining Company who then moved the family to Folkston, GA. Bill lived the rest of his life in Folkston. He loved his family and the outdoors. Every summer he had a garden that was greatly appreciated by many. In the fall he was picking grapes from his grape vines and hunting and fishing with his son Paul.

He is survived by a brother Jack, (Erma) daughters Terri Barton, (Bill), Pamela Crouser, Deborah Parmenter, (Danny) and a son Paul Keith, (Marilois). He has nine grandchildren, five great grandchildren and one great, great granddaughter.
He will be deeply missed by his family and many who knew him.
Services are Sunday Feb. 26 at Shepard-Roberson Funeral Home 526 Oakwood St. Folkston, GA 31537
Friends and family are invited to pay their respects at 1pm and services begin at 2.
In lieu of flowers donations can be made to Golden Isles Hospice Brunswick, GA.


To send flowers to the family in memory of Billy Keith, please visit our flower store.