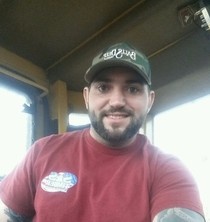 Casey Earl Lewis, 23, of Hilliard, FL passed away April 30, 2017 from injuries sustained in an automobile accident.  He was a Plank Owner member of the Nassau Chapter of the Blank Check Society.  He was a lifelong timber harvester, beginning with Earl Lewis Timber and Farm, currently with S&S Timber Company, of Lawtey, FL and continuing with the late Hunter Starling, David Starling, Austin Waters, and B.C. Lewis.  He was the start-up co-owner of DC Wood Production with Dusty Pate, in Hilliard, FL.  He was an avid woodsman, fisherman, hunter, musician, entertainer, biker, cattleman and farmer.  He was a descendant of the original families of Kings Ferry, FL.  He was dedicated with a passion to his family, friends, and loved ones.  He was a member of Ephesus Baptist Church.
He is survived by his fiancé:  Summer Haddock; his children:  Nathan Michael Lewis & Teaghen Lewis; his parents:  Sunshine (Brian) Valler & Eric (Tracie) Lewis; his grandmothers:  Karen Waters Hodges & Sara (Jerry) Dixon; his grandfather:  Raymond Earl Lewis; his sisters:  Erica (Nadal) Lewis & Megan Matthews; his half-sister:  Briana Valler; half-brother:  Matthew Valler; his step-children:  Lantz, Savana, Madeline & Khloe; 2-nephews: Raiden and Brantley; his step-grandparents:  Gary & Maureen Valler and a host of aunts, uncles, cousins and countless friends.
He was preceded in death by his grandfather:  Jesse Michael (Pa) Hodges.
The family will receive friends Friday, May 5 at Shepard-Roberson Funeral Home from 6-8 PM.  Funeral services will be held Saturday, May 6 at 2:00 PM at Buford Grove Baptist Church with Dr. Marvin Lee officiating.  Burial will follow in Kings Ferry Cemetery.
In lieu “Lew” of flowers, (which Casey would run over with his skidder anyway), make donations to Southeastern Bank in Hilliard, FL for his children Nathan and Teaghen.
Condolences may be expressed by signing the guest registry at www.shepardfh.com.  Arrangements are under the direction of Shepard-Roberson Funeral Home in Folkston, GA.


To order memorial trees or send flowers to the family in memory of Casey Lewis, please visit our flower store.