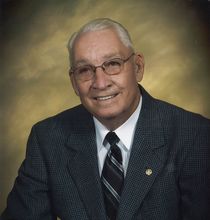 Cecil F. Higginbotham, 90, of Hilliard, FL passed away July 9, 2016.  He was born in Fargo, GA on August 25, 1925 to the late A.J. Higginbotham and Elizabeth McIntosh Higginbotham.  He was a veteran of the United States Army where he served in the Merchant Marines, 82nd and 101st Airborne during WWII.  He served on the Board of Directors of the Nassau County Farm Bureau.  Mr. Higginbotham retired after 30 years from St. Regis Paper Company.  He was a member of the First Baptist Church of Folkston.
He was preceded in death by his wife of 49 years:  Jean Opal Grooms Higginbotham; his parents:  A.J. & Elizabeth McIntosh Higginbotham; a step-father:  Everett Trigg; a brother:  Arthur J. Higginbotham; 2-sisters:  Marie Christeas & Freida Rowe.
He is survived by his children:  Wanda (Jimmy) Conner; 2-sons:  Russell (Dottie) Higginbotham & Terry (Tanya) Higginbotham; 5-Grandchildren; 12-Great Grandchildren; and a special friend:  Catherine Vanzant.
The family will receive friends Sunday, July 10 at Shepard-Roberson Funeral Home in Folkston, GA from 5-8 PM.  A graveside committal service will be held Monday, July 11 at 10:00 AM in Pineview Cemetery.  Funeral service will be held Monday, July 11 at 11:00 AM at the First Baptist Church of Folkston with Rev. Josh Hinson, Elder David Crawford and Dr. Randy Jacoby officiating.
Condolences may be expressed by signing the guest registry at www.shepardfh.com  Arrangements are under the direction of Shepard-Roberson Funeral Home in Folkston, GA.

To order memorial trees or send flowers to the family in memory of CECIL HIGGINBOTHAM, please visit our flower store.