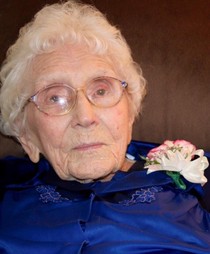 Frances Reynolds Millar, 101, of Folkston, GA passed away at her residence July 31, 2017.  She was born March 1, 1916 in Jacksonboro, SC to the late Wade Elton Reynolds and Sarah Jane Garvin Reynolds.  She  moved to Folkston in 1949 working as a telephone operator for the local phone company, but will be most fondly remembered working at the “Courtesy Shop” with Miss Maudard Bedell and Miss Ruth Hodges.  In 1967 she started her last career with the office of Dr. Jackson and Dr. Harper and worked there until the office closed.  She remained up to date in all areas of the news and world events with her Ipad.  She loved emails and photos from family and friends.  Her humor and Spunk will be so greatly missed by her family and friends.
She is survived by her sons:  Ted (Edna) Millar, Don Millar, Roy (Ann) Millar, Danny Millar and Robert Millar; her grandchildren:  Scott & Julie Ann Millar Cooper, Matthew & Tarla Millar, Todd & Heather Millar Morrison and Tom & Reva Millar; Great Grandchildren:  Alexa H. Morrison, Ella K. Morrison, Maddie C. Millar, Tanner Millar, Katie J. Cooper, Sally Frances Cooper, and Margot Millar; and several nieces and nephews.
A memorial service will be held Saturday, August 26 at 2:00 PM in the funeral home chapel.
To order memorial trees or send flowers to the family in memory of Frances Millar, please visit our flower store.

Services are to be announced