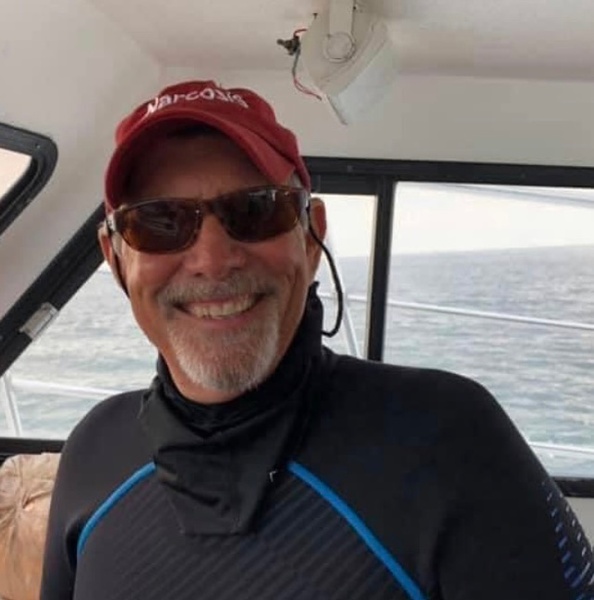 George was known for being a remarkable and good Christian man.  He loved life and led it as rapidly as the days came.  From reading and just finishing ten novels by one author to diving 100 feet once a week as a scuba diving instructor or conducting a Catholic prayer group for the Savannah Diocese he merged his activities easily among his passion for God and helping others through his friendship.

He was born in Redlands, California November 13, 1949, and died June 6,2022 in Folkston, Georgia in his sleep.  After growing up in the little town of Banning, California where his parents had a candy shop for 60 years, he chose to attend Humboldt College 800 miles away.  This was after receiving a state scholarship to anywhere in California due to his high-test scores. He majored in wildlife management and was hired by the US. Fish and Wildlife Service while only 19 years old. After 43 years in the US Fish and Wildlife Service he retired.  His work took him to Montana, and Nevada as a student trainee, then to Desert National Wildlife Refuge (NWR) as a biologist, onto Blackwater Refuge in Eastern Maryland, then to Cibola NWR as the Manager before he was thirty years old.  The latter was the place of special memories where he used to hunt and fish with this father when growing up.  After Cibola he was named the Assistant Manager of Wichita Mountains NWR then onto eleven years managing two more wildlife refuges in Oregon, Malheur and the Umatilla Refuge Complex.  His next station was in Alaska where he spent 16 years in as a Supervisor of refuges and later as Chief of Policy and Planning before ending his career as Manager of Okefenokee Wildlife Refuge in Folkston, Georgia.  After retirement he and his wife served in the U.S Peace Corps in the Republic of Armenia for 27 months.  When returning to their home in Georgia he became a scuba diving instructor and taught at Divers Den, in St. Marys, GA.

He was dedicated to learning whatever he could about fish identification, his Catholic Faith, wild river rafting  --whatever he was passionate about and he enthusiastically  enjoyed teaching and sharing this knowledge.  The last two years he taught a Confirmation Class, at St. Joseph’s in Waycross, Georgia and was instrumental in planning retreats and gatherings for Cursillo in the Diocese of Savannah using zoom meetings and his techie skills.

He is survived by his wife, Flor, of 51 years. He took exceptional care of her whether traveling, underwater, hiking or at home. Their daughter Amber Forth, her husband, Landon, and teen children, are Kyler, Rylan and Aubrey. George’s son named after him, lives in Jacksonville, FL.  His last son, Nicholas Constantino and his wife Tina, live in Anchorage, Alaska with school age sons, Cooper and Jax.  He had one sister, Rose Constantino Lee in Victorville, CA. His brother is John Constantino, Fortuna, California.

George contributed to many charities from 100miles.org, a nonprofit in Brunswick, GA  to protect our Georgia coastline to Catholic Relief Services( CRS ) at support.crs.org  which works internationally to aid people in need.  The family thanks all the friends, family and his former work associates that have sent an outpouring of messages to them.  He made our world a better place and is dearly missed.  Services will be held in Anchorage, Alaska, July 27th, 2022 at St. Patrick’s Church, 2111 Muldoon Rd. at 5:30 pm with a reception following.

To send flowers to the family in memory of George Michael Constantino, please visit our flower store.