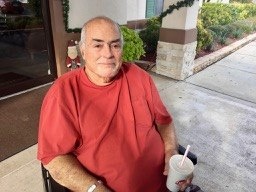 He graduated Rollins College with a degree in Theatre Arts.  He then joined the US Navy serving as a Lieutenant with the Reconnaissance Attack Squadron.  He received the National Defense Medal, Vietnam Service Medal, Vietnam Campaign Medal and the Navy Unit Commendation.  Crick loved trains and spent many happy hours rail side at the Folkston Funnel.

In lieu of flowers, please make donations to the City of Folkston c/o the Folkston Funnel, The Forgotten Felines or the charity of your choice.

To send flowers to the family in memory of Harold "Crick" Hatch, Jr., please visit our flower store.