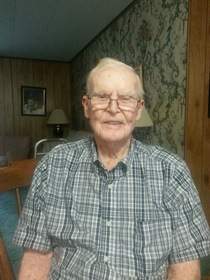 Hugh Buchanan, 90, of Callahan, FL passed away on his birthday, December 14, 2015 at his residence.  He was born in Sharon, PA to the late Hugh Buchanan, Sr. and Margaret Park Buchanan.  He proudly served his country in the US Navy.  He was a founding member of the First Alliance Church in Hilliard.
Along with his parents, he was preceded in death by his wife:  Phyllis Jean McClimans Buchanan and a brother:  Richard Buchanan.
He is survived by his 3-Children:  Thomas Buchanan, Wray Buchanan & Pamela Hicks and a Sister:  Sandy Allison; 8-Grandchildren, 12-Great Grandchildren and 2-Great Great Grandchildren
The family will receive friends Friday, December 18 at Shepard Funeral Home from 6-8 PM.  Funeral services will be held December 19 at 11:00 AM in the Chapel of Shepard Funeral Home with Pastor Ted Heglund officiating.  Burial will be in Edgewood Cemetery in Jacksonville, FL.
Pallbearers will be his grandsons:  Jim Buchanan, Jeff Lindsey, Joey Martin, Jared Buchanan, Lee Buchanan, Brian Hicks and Brad Hicks.  Honorary pallbearers will be his great grandsons:  Lance Lindsey, Cameron Lindsey, Scott Hicks and Christian Hicks.
Condolences may be expressed by signing the guest registry at www.shepardfh.com.  Arrangements are under the direction of Shepard Funeral Home in Folkston, GA.

To send flowers to the family in memory of Hugh Buchanan, please visit our flower store.