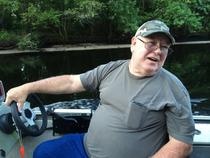 Jack David Herrin, 66, of Homeland, GA passed away at his residence March 9, 2015.  He was born September 8, 1948 in Charlton County to the late James David Herrin and Bessie Irene McClellen Herrin.  He retired from International Paper as a Boiler Operator.  He served two consecutive tours of duty in Vietnam in the United States Navy.
Along with his parents, he was preceded in death by his wife:  Nettie Herrin; a son:  Greg Norsworthy; a daughter:  Grendl Walden and a sister:  Sandra Haddock.
He is survived by his children:  April (Ray) Morgan, J.J. Herrin, Autumn (Hemi) Dhar and Michelle Herrin; a sister:  Charlotte (Dick) Goff; a brother:  James (Todd) Herrin; a sister-in-law:  Sylvia Polk and a brother-in-law:  Buddy Starling; 14-Grandchildren and 19-Great Grandchildren.
The family will receive friends Friday, March 13 at Shepard Funeral Home from 6-8 PM.  Funeral services will be held Saturday, March 14 at 11:00 AM in the Chapel of Shepard Funeral Home.  Burial will be in Homeland Cemetery.
Condolences may be expressed by signing the guest registry at www.shepardfh.com.  Arrangements are under the direction of Shepard Funeral Home in Folkston, GA.

To send flowers to the family in memory of JACK HERRIN, please visit our flower store.