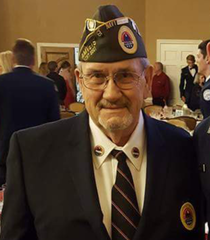 Jack Lee Howarter, 79, of Hilliard, FL passed away July 21 in Jacksonville, FL.  He was born August 6, 1936 in Hastings, Nebraska to the late Kenneth Henry Howarter and Gwendolyn Genevieve Jones Howarter.  He graduated high school in 1954 in Hastings.  He proudly served his country in the US Navy.  He was an instructor at the FAA Training School in Oklahoma City and retired from the Federal Aviation Administration as an Air Traffic Controller Supervisor.  He served the town of Hilliard as the President of the town council, Volunteer Fire Department, Police Commissioner, and the Hilliard High School Booster Club.  He was a member of the Callahan Lions Club, American Legion, VFW, Veterans Council and the AmVets, where he served as President of NE Florida.  He was the Project Manager for the Bell Tower at the Jacksonville National Cemetery.
Along with his parents, he is preceded in death by wife:  Billie Joyce Howarter and a grandson:  Gregg Howarter.
He is survived by his wife:  Nancy Howarter; 12-Children:  Teresa (Randy) Walcker, Cynthia (Richard) Holoka, Gregg (Donna) Howarter, Deborah (Jimmy) Black, David Howarter, Kenneth (Renee)Thompson, Arletta (Bill) Stewart, Tina (Robbie) Kerns, Shari O’Berry (James) Ashmore, Nancy (Mike) Brown, Sissy Henderson, & John Bass; a Sister:  Barbara (Joe) Griffin; 30 Grandchildren and 27 Great Grandchildren
The family will receive friends, Tuesday, July 26 at Shepard-Roberson Funeral Home from 6-8 PM.  Funeral services will be held July 27 at noon in the Chapel of Shepard-Roberson Funeral Home.  Burial will follow in Jacksonville National Cemetery.
Condolences may be expressed by signing the guest registry at www.shepardfh.com.  Arrangements are under the direction of Shepard-Roberson Funeral Home in Folkston, GA.


To send flowers to the family in memory of Jack Howarter, please visit our flower store.