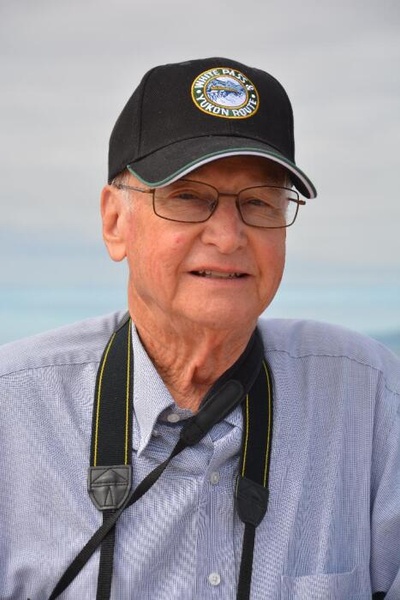 Jack Allen Moore passed away at home under the passionate care of Community Hospice surrounded by his loving family on August 25, 2021 of complications from diabetes and Alzheimer’s. He was born at home in Atkins, Arkansas on September 12, 1935 to Dooley Lovard and Minnie Ilta Deal Moore. He was the second of four sons. He grew up in Shawnee, Oklahoma, graduating from Shawnee High School in 1953. He held many jobs in his youth, most notably at Shawnee Mills and Woolworth where he began sweeping up and became a trusted key-holder at the age of 16. Jack worked summers for his father as a plumber’s assistant and this is where he learned how important it was to have a good work ethic.  Jack joined the Army in 1955 and became an Artillery Survey Specialist. After serving three years, he was honorably discharged and took advantage of the GI Bill to attend the University of Oklahoma in Stillwater. He studied electronic engineering.  Moving to Jacksonville, Florida in 1959 to begin work at the Imeson-based Federal Aviation Administration Center, he soon met his beautiful wife of 60 years, Delores Jean Henderson Zelner after she asked him to help with faulty plumbing at the Trout River Apartments where they were neighbors. They plunged into married life in 1961. The couple have two daughters whom they cherish, Kimberly Jean and Lisa Marie. Raising them in San Mateo on the Northside of Jacksonville, they attended Eastport Baptist Church together where Jack served as treasurer and built furniture for the preschool classrooms.  In 1977, the family moved to Hilliard, Florida and Jack built their dream home on a lush green hill amidst beautiful oaks and a gently flowing creek that dissected five acres. He worked shifts at the FAA Center in Hilliard and tended his land during his days off.  He saw the computer industry change through the years from room-sized machines with vacuum tubes to tape to punch tickets to floppy disks to USB drives. He could write code in many computer languages and was often sought out to diagnose problems in troublesome systems. Jack retired as a Systems Analyst after almost 35 years with the FAA.  He and his wife lived in Honolulu, Hawaii for four years while Jack worked as a Site Manager for Diversified Information Systems Corporated, contracted to work for the FAA Center located in Diamond Head. They must have seen the Charo Show at the Hilton Hawaiian Village two dozen times. After a short stint working for Regal Decision Systems, Inc. in Atlantic City, New Jersey, Jack returned to work for DISC in Taipei, Taiwan as a Senior Software Engineer before retiring for good. He was a member of NARFE (National Association of Retired Federal Employees).  Jack was a member of the First Baptist Church of Hilliard for many years. He enjoyed fishing with his grandsons and great-grandsons, could work on any machine, build any plan he drew out, sewed one of his daughter’s final home ec projects so she could graduate high school and completed an anatomy assignment for another so she could pass a class. He always helped his daughters succeed. He dabbled in painting, jewelry making and photography. He was truly a “Jack of all trades.”

He is preceded in death by his parents Dooley & Ilta, his brothers William Alfred, Robert David, and Jimmy Lovard, and his beloved first grandson Justin Allan Morgan.

Visitation will be held at First Baptist Church of Hilliard, Florida on Wednesday, September 1st at 9:30 am followed by a Memorial Service at 10:30 am. Internment with military honors will follow at the Jacksonville National Cemetery on Lannie Road, Jacksonville, Florida at 1:30 pm.

In lieu of donations, contributions may be made to Community Hospice, First Baptist Church of Hilliard Building Fund or the Nassau County Humane Society.

To order memorial trees or send flowers to the family in memory of Jack Moore, please visit our flower store.