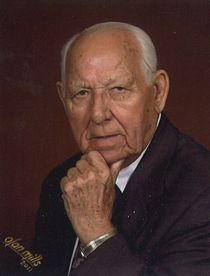 James Markis Shuman, 96, of Folkston, GA passed away peacefully at his residence February 9, 2018.  He was born October 25, 1921 in Hazlehurst, GA to the late Elzie Shuman and Mattie Hughes Shuman.  He proudly served his country in the US Army during WW II.  He fought in Germany during D-Day where he was wounded and received the Purple Heart.  He served as Sunday School Director at Ephesus Baptist Church for several years and was currently a member of First Baptist Church of Folkston.  He was a member of the Masonic Lodge in Jacksonville and the Morocco Shrine Temple.  He served on the Chamber of Commerce in Folkston and was once President of the Folkston Exchange Club.
Along with his parents, he was preceded in death by his daughter:  Sandra D. Shuman and a grandson:  Markis Edwin Rhoden and all of his siblings.
He is survived by his daughters:  Wanda Banks and Janice (Greg) Ross; 3-grandchildren:  Kathy Edwards (Jimmy) Minter, Sean Ian (Katherine) Ross and Elizabeth Lindsey Banks; 6-Great Grandchildren; Son-in-Law:  Eddie Rhoden; Like-son:  David Davis; Like-Brother:  Wallace Smith.
The family will receive friends Tuesday, February 13 at Shepard-Roberson Funeral Home in Folkston, GA from 6-8 PM.  Funeral services will be held Wednesday, February 14 at 11:00 AM at First Baptist Church of Folkston, GA with Dr. Randy Jacoby officiating.  Burial will be held at 3:00 PM at Satilla Baptist Church Cemetery in Hazlehurst, GA.
Condolences may be expressed by signing the guest registry at www.shepardfh.com.  Arrangements are under the direction of Shepard-Roberson Funeral Home, 526 Oakwood Street, Folkston, GA 31537.  912-496-7388

To send flowers to the family in memory of James Shuman, please visit our flower store.