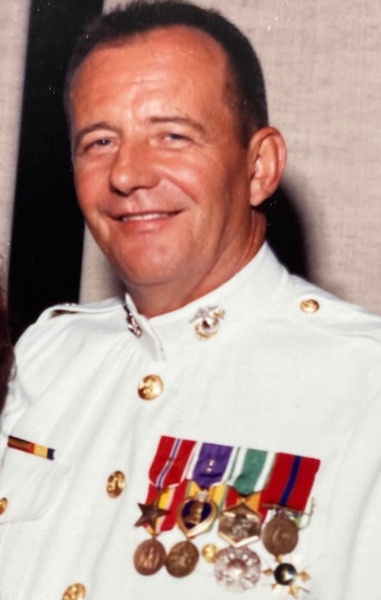 Lieutenant Colonel James L. Trudeau USMC (Retired) age 82, passed away on January 23, 2021.  He was born February 10, 1938 in New York, NY and raised in Windsor CT.  Jim was a graduate of the Loomis Chaffee School class of 1956. After graduation he postponed his admission to Brown University to answer the call of duty, enlisting in the United States Marine Corp.

He continued his USMC journey in Quantico, VA., at Officer Candidate School from 2 Oct until 15 Dec 61, receiving a commission as 2nd Lieutenant. He completed the Basic School (Quantico) 27 Jun 62.

Later he was assigned to 3rd Marine Division arriving in Vietnam in 1967 going directly to Con Thien where he was the company commander of “M” Company. He was seriously wounded 22 Sept 67, medivaced receiving his first Purple Heart. He rejoined 3/9 as S-4 in late November, then was reassigned as CO of “I” Company in 68.  On 13 Jan 68 his company was ambushed between the Rockpile & Ca Lu.  On 2/15/68, he was WIA for the third time and was medivaced out again.  After rejoining 3/9 in April ’68, he was ordered out of the country, subsequently, finishing his overseas tour. During this tour he received numerous awards including the Bronze Star with Combat “V”, three Purple Hearts, Vietnamese Gallantry Cross with Bronze Star, Vietnam Service medal, Republic of Vietnam Campaign Medal, Presidential Unit Citation. He had a stellar career retiring from the Corp in 1981.

He would go on to do many things, one of the most memorable was his time as Deputy Commandant of Cadets at SUNY Maritime College, Fort Schuyler, NY.

Lt Col. Trudeau will be laid to rest with Military Honors at the Jacksonville National Cemetery on February 10, at 2:30, 4083 Lannie Road, Jacksonville, Florida 32218

The family invites guest to the home following the service for a “Celebration of the Colonel’s Life”, 162 Martin Street, Folkston, GA

To send flowers to the family in memory of James Trudeau, please visit our flower store.

Recitation of the Rosary