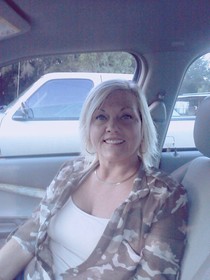 Jana Arlene Stoner, 47,loving mother and daughter went home to be the lord September 21, 2017 in Jacksonville, FL following a lengthy illness.  She was born October 27, 1969 in Jacksonville, FL.  She was a 1987 graduate of West Nassau High School.  She retired as a School Bus Driver after 13 years with the Nassau County School System. She enjoyed being outside planting her flowers.  She was a free and joyful spirit . She devoted her life to her four daughters and her grandchildren. Her life revolved mostly around her grandbabies who she loved being a NeNe to. She loved singing and dancing with her grandbabies. She will be missed tremendously by her family and everyone who knew her.
She was preceded in death by her sister Dana James.
She is survived by her children:  Amber Stoner, Kristen Stoner, Kaylee Stoner and Sara Stoner; her parents:  James & Judy Merritt; her siblings:  Jamie (Sherry) Merritt, Gina (Neil) Bolen, Lana Tanner, Donna Dale, Marlena (Randy) Michael & Jonathan Merritt; 4-Grandchildren:  Bryleigh Stoner, Reilynn Scheider, Karsynn Scheider & Waylon Hodges and a number of nieces and nephews.
The family will receive friends Tuesday, September 26 at Shepard-Roberson Funeral Home in Folkston, GA from 6-8 PM.  A graveside service will be held Wednesday, September 27 at 11:00 AM at Sardis Cemetery.
Condolences may be expressed by signing the guest registry at www.shepardfh.com.  Arrangements are under the direction of Shepard-Roberson Funeral Home, 526 Oakwood Street, Folkston, GA 31537.  912-496-7388

To send flowers to the family in memory of Jana Stoner, please visit our flower store.