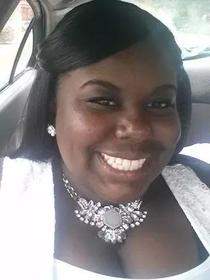 Joanna Cherelle Peterson-Birdsell was born June 25, 1988 in St. Marys, Georgia. At a young age she moved to Poughkeepsie, New York to start a new journey. Joanna found new friends and a new job where she was living her own dreams that she had. Then later Joanna met her husband            and that was her last piece of her puzzle. Joanna was very, very happy living her dreams. Joanna is well known for her kindness, sweetness and willingness to help anyone. She is so blessed to have the love of so many people in her life as well the love she gives to so many people. Joanna, you will be missed in our lives as well as friends and family seeing that beautiful smile always, love you Mama and Daddy. Her courageous and    unselfish life ended January 18, 29015. She was preceded in death by her grandparents: George and Ruby Dell Peterson, Grandfather; Malachi Christopher; her twin babies: Wyatt and Alissa; Joanna leaves to cherish   her memories her loving husband: Jayson Birdsell of Poughkeepsie, New York; her parents: Joe and April Peterson of Folkston; her biological mother: Roxanna Christopher of Miami, Florida; one brother: Marquis Christopher of Miami, Florida; two wonderful in-laws: Margerat Rider, John Birdsell of new York; one God son: Tray Bell; two adopted sons: Mason and Evan Birdsell of New York; loving grandparents: Vernell and Cattie Sams of Brunswick, Georgia; Joyce Christopher of Folkston, Ga.; Roseann Anderson, Georgia Peterson of Folkston, Ga. Carolyn Peterson, Vanessa Peterson, Sylvia Peterson of New York; George(Melody)Peterson of Folkston; Charlie Peterson of Overseas; Eleanor (Curtis Jones, Kelvin(Gloria) Peterson of Folkston; Wanda(Kenny) Cash of Jacksonville, Fll.; Marsha(Larry) Young, Kenny(Maxine) Peterson of Folkston, Ga. and a host of Cousins and friends.
To send flowers to the family in memory of Joanna Birdsell, please visit our flower store.