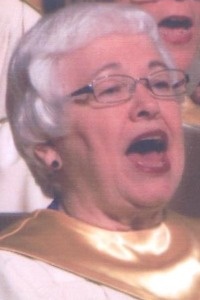 Mrs. Jolane Rawl Guske, 75, of Tifton passed away Wednesday, October 19, 2016, at Phoebe-Putney Memorial Hospital in Albany. A memorial service will be held for Mrs. Guske at 11:30 a.m. Saturday, October 22, 2016, at Tifton’s First United Methodist Church, with the Rev. Benjy Varnell and the Rev. Robby Paulk officiating. The family will receive friends Friday, October 21, 2016, from 6:00 to 7:00 p.m. at Bowen-Donaldson Home for Funerals.

Born January 4, 1941 in Folkston, Mrs. Guske was the daughter of the late Evelyn Kaminer Rawl and C. O. Rawl. She was also preceded in death by one brother, Rolf Rawl. She grew up in Kingsland and had a passion for reading, learning and singing. In high school, she sang in her high school trio called the Charltonettes and was crowned Miss Satilla Shrine and Homecoming Queen. She graduated valedictorian from Charlton County High School in 1959. She always sang in the church choir and considered her voice “a gift of God.”

Mrs. Guske attended Georgia Southern College, where she met and married Kent Allen Guske on August 26, 1961. In 1963, she graduated with honors from GSC with a B.S. in Education. She was named to the Honor Society. She taught school for a few years before becoming a stay-at-home mother to her three children. She was also a den mother for the Cub scouts during this time. She has lived in seven states, having moved 11 times. She was a contestant on the TV game show Family Feud in 1979 and 1981. Instilled with a love of teaching, she earned her Master’s degree in 1982 and her Specialist degree in 1985, both from Georgia Southwestern College in Americus.

Mrs. Guske retired in 2001, after more than 25 years of teaching, during which she was awarded Teacher of the Year in Worth County in 1984. She was a member of Tifton’s First United Methodist Church, where she was an active participant in Club 55 and the choir. She was an avid scrapbooker and book club participant.

In lieu of flowers, the family requests that memorial gifts be made to Tifton’s First United Methodist Church, 107 12th Street West, Tifton, GA 31794.

Graveside Services will be Saturday, October, 29, 2016 at 3:00 PM in Pineview Cemetery.  Shepard Roberson Funeral Home, Folkston, Georgia  is in charge of local arrangements.

To send flowers to the family in memory of Jolane Guske, please visit our flower store.