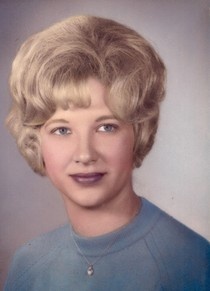 Karen Elaine Chesser, 73 of Mathews County, Virginia passed away peacefully April 30, 2016 at the family residence of Joe L. Chesser of Folkston, Georgia, following an extended illness.  She was born in San Diego, California to William”Chris” and Jewell Weems Christiansen, both of Roswell, Georgia, on March 20, 1943. She was preceded in death by both her parents.
Karen attended the University of Georgia, where she met her loving husband Aaron Chesser. They both relocated to the Washington, D.C. area in the early 1960’s. Karen worked at the Arlington Bank and Trust and later for U.S. Airways in Crystal City, Arlington VA, where she retired in 1996. They relocated to Susan, VA, where they delighted in catching crabs in Mobjack Bay and growing vegetables in their gardens that she and her husband Aaron raised and give-away vegetables for the neighbors for a number of years.  Karen enjoyed being a member of the Newpoint Homemakers Club and was the Secretary for several years; meetings were rotated among members. Karen was Secretary to the Northern Virginia Football Club in Falls Church, VA. She ran the concession for the youngsters in weight classes ranging from 75 to 150 and numbering 8-11 teams, including Cheerleaders.
She is survived by her husband Aaron Chesser of Susan, VA; her children: Jeffrey K. Chesser of Chantilly, VA: Kevin M. Chesser of Charlottesville, VA: Holly D. Green of Chantilly, VA; Grandchildren: Mark J., Adam L.  and  Kyle N. Chesser, all of Ballivor, Co. Meath Ireland and  Aaron J. Chesser of Mansfield, Ohio; Daughter –in-law: Catherine M. Chesser of Ballivor, Co. Meath Ireland; Son-in-law: Carl Green of Chantilly, VA; two brothers: Stephen L. and Lisa Christiansen of Murfreesboro, TN and Gary C. and Debi Christiansen of Baxter, TN.; several nieces, nephews and other relatives.
Pallbearers:  Hank Sirmans, Greg Sirmans, Tracy Chesser, Hal Chesser and Joseph Chesser. Honorary Pallbearers:  Sheppard (Shep) Brock, Gary Gowen and Randy Gowen
The family will receive friends Monday, May 2, 2016 at 10:00 AM at Philadelphia Free Will Baptist Church. Funeral services will begin at 11:00 AM with Rev. Stephen Jackson and Rev. Gene McCollough officiating. Burial will follow in Sardis Cemetery. The family request in lieu of flowers a donation be made to Heartland Hospice Care, 1109 Fountain Lake Dr., Brunswick, Georgia 31525.
Condolences may be expressed by signing the guest register at www.shepardrobersonfh.com. Arrangements are under the direction of Shepard Roberson Funeral Home, Folkston, Georgia.

To order memorial trees or send flowers to the family in memory of Karen Chesser, please visit our flower store.