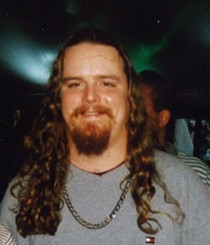 
Kenneth Andrew (Andy) Snyder, Jr. 44 (YDNA) of Folkston passed away September 8, 2016 at his residence. He was born March 27, 1972 to Kenneth Andrew, Sr. and Julie Byrd Snyder in Fernandina Beach, Florida.
He was a member of the Camden County High School band and a graduate of Camden County High School in 1990. He graduated with his Applied Science Degree from Dallas Institute of Funeral Services, Dallas, Texas. He then worked with Dekle-Wainwright Funeral Home of Kingsland, Georgia, as an apprentice, and has been employed for 25 years as a Mechanical Insulator.
Andy had a great smile that was extremely contagious, beautiful long hair and a friendly spirit that no one could resist. He was a die hard Gator, history buff and an avid reader. He was passionate about music and loved sharing that passion with his friends and family. He was a member of The First Baptist Church of  Folkston, Georgia.
Andy is survived by his mother Julie Byrd Snyder of Folkston, Ga and father Kenneth Andrew Snyder, Sr. of Yulee, Fl; a Son Kenneth Andrew (Trey) Snyder III and his mother Christine Moore; Grandmother Florence Byrd Crews of Folkston;  several Aunts, Uncles, and Cousins. He was preceded in death by step-grandfather Buster Crews, of Folkston and grandparents Frank D. Snyder Sr. and Helen Snyder of Fernandina Beach, Fl.
The family will receive friends Tuesday, September 13, 2016 from 6 until 8 PM at Shepard Roberson Funeral Home. Funeral services will be Wednesday, September 14, 2016 at 10:00AM at First Baptist Church of Folkston, with Dr. Randy Jacoby and Rev. Gene McCullough officiating. Burial will follow in Pineview Cemetery.  Condolences may be expressed by signing the guest registry at www.shepardrobersonfh.com.  Arrangements are under the direction of Shepard Roberson Funeral Home, Folkston, Georgia.
To order memorial trees or send flowers to the family in memory of Kenneth "Andy" Snyder, Jr., please visit our flower store.