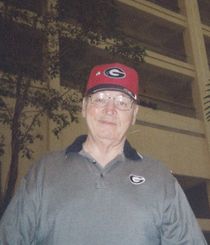 LeRoy Donald Redmon, 82, of Yulee, FL, passed away at his home September 18, 2017.  He was born in Millville, KY November 5, 1934 to the late Walter Redmon and Betty Mae Huffman Redmon.  He proudly served his country in the US Marine Corps during the Korean Conflict.  He retired from General Motors in Atlanta, GA after a number of years of faithful service.   He was an avid Georgia Bulldog fan.
Along with his parents, he was preceded in death by his brother:  Bobby Redmon and a sister:  Louise Willis.
He is survived by his wife of 57 years:  Mary D. Redmon; 2-Sisters:  Edith Clark and Mary Thompson and a number of nieces and nephews including:  Ken (Mary) Walker, Chuck (Jane) Walker, Donald Walker, Sheila Walker, Randy Snyder, Ellen Snyder, Julie Grainger, Sammy Snyder and Cliff Snyder.
Funeral services will be held Saturday, September 23 at 10:00 AM in the chapel of Shepard-Roberson Funeral Home.  Burial will be Monday, September 25 at 11:00 AM at Crest Lawn Cemetery in Atlanta, Georgia.
Condolences may be expressed by signing the guest registry at www.shepardfh.com.  Arrangements are under the direction of Shepard-Roberson Funeral Home, 526 Oakwood Street, Folkston, GA 31537.  912-496-7388


To order memorial trees or send flowers to the family in memory of LeRoy Redmon, please visit our flower store.