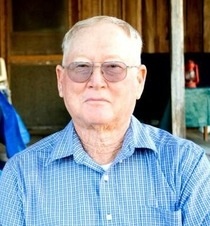 Milton J. Glisson, 78, passed away on June 22, 2017 in Jacksonville, Florida. He leaves his wife of 52 years, Jimmie Jane (Mattox) Glisson; 2 daughters Tracey (Garrett) Johnson and Michelle (Chris) Strickland; six grandchildren Mallory (Patrick) Armistead, Ethan Ganey, McKenzie Johnson, Gage Griffin, Sydnee Johnson, and Cooper Strickland; one great grandson Mattox Armistead; a brother David (Henri) Glisson; a son-in-law:  Lester Griffin and his best friends:  Michael and Delores Holder as well as many nieces and nephews. Along with his parents, he is preceded in death by his daughter Suzy Griffin and brother Bob (June) Glisson.
Milton was born in Lecanto, FL September 29, 1938 to the late Warnell and Pernie Glisson.  He and his brothers operated a Glisson Brothers Construction.  Milton retired from Kings Bay Submarine Base where he worked as a crane operator. After retiring Milton and Jimmie spent their summers in North Carolina. He drove a rafting bus where he enjoyed meeting new people from all walks of life. He loved spending time with his grandkids and his dogs.
The family will receive friends Sunday, June 25 at Shepard-Roberson Funeral Home in Folkston, GA from 6-8 PM.  Funeral services will be held Monday, June 26 at 11:00 AM at Philadelphia Free Will Baptist Church with Rev. Parnell Aldridge, Rev. Gene McCullough and Rev. Stephen Jackson officiating.  Burial will follow in Sardis Cemetery.
Condolences may be expressed by signing the guest registry at www.shepardfh.com.  Arrangements are under the direction of Shepard-Roberson Funeral Home in Folkston, GA.

To order memorial trees or send flowers to the family in memory of Milton Glisson, please visit our flower store.