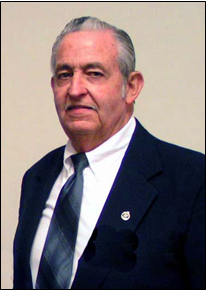 Homeland Mayor Ralph “Austin” Hickox, Sr., 74, of Homeland, Georgia passed away September 23, 2014 surrounded, and cared for, by his beloved five children.  He was a lifelong resident of Charlton County.  Mayor Hickox was born March 30, 1940 at the three generation Hickox family homestead to Paul Samuel and Violet Hodges Hickox.
Hickox served the community of Homeland for 32 years.  He was first elected to the Homeland City Council in 1972 by write- in ballot.  He served this position until 1981.  In 1992, he was appointed to fulfill an expired term on the Homeland City Council and was named Mayor Pro Tem.  On November 9, 1995, he was elected Mayor, again by write-in ballot, and continued to serve as Mayor of Homeland unopposed until is death.  He also served the dual role of City Manager. Under his leadership, the city of Homeland experienced rebirth and growth.  Hickox fought for the city of Homeland to share in Charlton County’s local option sales tax, which most recently included a $100,000 award to Homeland.  He personally wrote and acquired millions of dollars in grants for street paving and other community needs, helped inaugurate the city’s water system, an active police department, city-owned and operated residential garbage pickup, and with the help of his city council, opened a new paved access route into north Homeland.
At his death, Hickox was Board Secretary of the Southern Georgia Regional Commission Council, which serves 18 counties in South Georgia. He served this Commission since 1997 and was Board Chairman from 2005-2007.  Under this Commission, Hickox served as a board member of the Workforce Investment Board since 2006 and the Aging Advisory Council since 1998, holding the position of Board Chair since 2000.  These affiliations made valuable friends for Hickox personally and for his city.
His proudest achievement in life was his five children, whom he loved dearly, equally, and unconditionally. Each held a special place in his heart.
Hickox is survived by a son, Ralph Austin Hickox, Jr. and wife Jamie of Jesup, Georgia; four daughters, Donna Poe and husband Howard of Darien, Georgia; Deborah Shelnutt and husband Robert of Hoschton, Georgia; Delores Todd and husband Michael of Folkston, Georgia; Deanna Robertson of Auburn, Georgia; his mother Violet Hodges Hickox of Folkston, Georgia; a brother, Harley Lee Hickox and wife Sandra of Folkston, Georgia, twelve grandchildren, five great-grandchildren; and two nephews.  He was preceded in death by his father, Paul Samuel Hickox, infant brother, Samuel Eugene Hickox, and two grandsons, Austin Tyler Robertson and Matthew Curtis Gowen.
Pallbearers are Sheriff Dobie Conner, Chief Jonathon McMillan, Sargent Perry Green, Sargent Mike King, Sargent Ed Green, and Officer Cody Davis.  Honorary Pallbearers are Brad Todd, Southeast Georgia Law Enforcement Officers, Homeland City County Members, and Southern Georgia Regional Commission Board Members.
The family will receive friends Thursday, September 25, 2014 at Shepard Funeral Home from 6pm until 8pm and request Memorial contributions be made to Heartland Hospice, 664 Scranton Road, Suite 103, Brunswick, Georgia 31520 or www.heartlandhospice.com/Brunswick.  Funeral services will be Friday, September 26, 2014 at 2:00pm at Camp Pickney Baptist Church with Reverend Keith Lloyd officiating. Burial will follow in Homeland Cemetery.  Condolences may be expressed by signing the guest registry at Shepard Funeral Home /Folkston, Georgia.  Arrangements are under the direction of Shepard Funeral Home, Folkston, Georgia.

To order memorial trees or send flowers to the family in memory of Ralph Hickox, Sr., please visit our flower store.