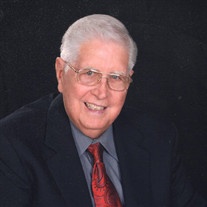 Richard James Allen passed away peacefully surrounded by his family on 2/17/2020. He was
born in Miami on September 22, 1931. He graduate from Miami High in 1949. Richard
served in the United States Air Force for four years and retired from Eastern Airlines in 1989.
Richard is survived by his wife of 52 years, Barbara. Sons Richard Jr. (Jeri), James (Renee), grandchildren Tara, Katie (Brandon), Chris and great-granddaughter Sierra Grace.

The family will receive friends Friday, February 21, 2020 at Shepard-Roberson Funeral Home in Folkston, Georgia from 6-8 PM.  Graveside services will be held Saturday, February 22 at 11:30 in Corinth Cemetery.

Arrangements are under the direction of Van Orsdel Family Funeral Chapels in Miam, FL and Shepard-Roberson Funeral Home in Folkston, GA.

To send flowers to the family in memory of Richard Allen, please visit our flower store.