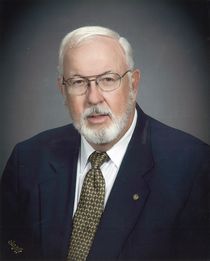 Rodney E. Bennett, 75, of Folkston, GA passed away September 2 at his residence.  He was born July 8, 1940 to the late W.R. Bennett and Virginia Westberry Bennett in Screven, Georgia.  He was a graduate of The Glynn Academy Class of 1958 and the University of Georgia Bankers School.  He was a member of the Sons of American Revolution.  He proudly served his country during Vietnam in the United States Air National Guard.  He was a member of Doe Bay Hunting Club and the First Baptist Church of Folkston.  His voice could be heard on many fall Friday nights calling the play by play for Charlton County Indian Football.  Until his passing, he served as Chairman of the Board for First Atlantic Bank in Jacksonville, FL.
He is survived by his wife of 55 years, Annette G. Bennett; 2-Children:  Karla B. Hood (Scott) and Jeff Bennett (Staci); a granddaughter:  Landri Bennett and a sister:  Sylvia Slebos.
The family will receive friends Friday, September 4 at Shepard Funeral Home from 5-8 PM.  Funeral services will be held Saturday, September 5 at the First Baptist Church in Folkston at 11:00 AM with Dr. Randy Jacoby officiating.  Burial will be in Bennett Cemetery in Screven Georgia at 3:30 PM.
In lieu of flowers, donations may be made to the First Baptist Church of Folkston, 1320 Third Street, Folkston, GA 31537 or Hospice of the Golden Isles, 1692 Glynco Parkway, Brunswick, GA 31525.
Condolences may be expressed by signing the guest registry at www.shepardfh.com.  Arrangements are under the direction of Shepard Funeral Home in Folkston, GA.

To order memorial trees or send flowers to the family in memory of Rodney Bennett, please visit our flower store.