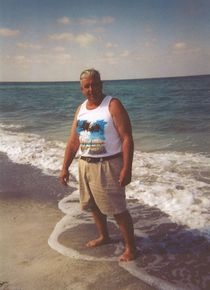 Ronald James Peete, 69 of Folkston passed away October 24, 2015 at his
residence. He was born April 10, 1946 to Gerald and Olive O’Brien Peete in Niagra Falls, New York.  He served his country in the United States Army during the Vietnam Conflict.
He was a member of the American Legion Post #130 and St. Francis of Assisi.
He is survived by his wife of 50 years: Annette L. Peete of Folkston; two children: Chris (Amy)Peete and Veronica (Andy) Barrett; one brother: Jerry Peete; two sisters: Sue Ann Socko and Denise Peete; three grandchildren: Ryan C. Peete, Brody A. Barrett and Tyler H. Peete; several nieces, nephews and other relatives. Along with his parents, he was preceded in death by a brother: Fred Peete.
The family will receive friends Tuesday evening, October 27, 2015 from 6 until 8 PM with a Rosary beginning at 7:30 at the funeral home . Funeral services will be Wednesday, October 28, 2015 at 11:00 AM at St. Francis of Assisi. Burial will follow in Homeland Cemetery. The family request, in lieu of flowers, contributions be made to the American Legion or the American Heart Association.
Condolences may be expressed by signing the guest registry at www.shepardfh.com.
Arrangements are under the direction of Shepard Funeral Home, Folkston, Georgia.

To send flowers to the family in memory of Ronald Peete, please visit our flower store.