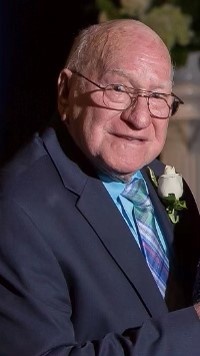 Russell Robert "Bob" Dillon, 95 of St. George, GA passed away on Saturday, March 5th, 2022 surrounded by family. He was born in a small town in Illinois on March 17th, 1926. He was a member of First Baptist Church of St. George. He served in the United States Navy during World War II. After serving in the military, he worked for Boeing for 25 years. He moved his family to Florida in his early 40s where he worked multiple jobs. After retirement, he enjoyed going to church, traveling, gardening, Southern Gospel music, old westerns, telling jokes and being with his family.

He is preceded in death by his wife; Nina Renshaw Dillon, and three of his children; David Dillon, Russell Dillon and Peggy Bailey.

A service will be held on Friday, March 11, 2022 at 11:00am at Northside Church of God located at 5252 Dunn Avenue in Jacksonville, Florida with Rev. Justin Preston and Rev. Aaron Ferry officiating. The family will receive friends one hour prior to the service.

To send flowers to the family in memory of Russell Dillon, please visit our flower store.