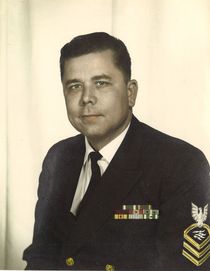 Vanice Horace Sikes, Sr., 81 of Waycross, Georgia passed away April 2, 2015
In Mayo Clinic Health Systems of Waycross. He was born March 7, 1934 to Daniel Eustace Sikes and Evie Loraine Fowler Sikes in St. George. He served his country for twenty two years in the United States Navy and retired a Chief Petty Officer. He was a veteran of the Korean War, French-Indo China conflict and the Vietnam War. Van served aboard the USS George Clymer, USS Howard W. Gilmore, USS Proteus, USS Falgout and the USS Piedmont, among other shore duties from Scotland to Hawaii. He was a member of Folkston First Baptist Church and Camp Pinckney Baptist Church where he started the first Senior Citizen’s Class. He was a member of Hacklebarney Baptist Church, Blackshear, Georgia. He was a member of the Masonic Lodge in Louisville, Kentucky for 43 years. He was a life-time member of the Disabled American Veterans and a member of the American Legion.
He is survived by his wife of 60 years: Virginia Sikes of Waycross; 2 sons: Vanice H. Sikes, Jr. (Tracy) of Marietta, Georgia; Gregory P. Sikes(Sharlyon) of Statesboro, Georgia; one daughter: Lisa Sikes Sands(Matt) of Folkston, Georgia; one brother: Donald G. Sikes(Shirley) of Pleasantington, Texas; a sister: Madalene White of Folkston; six grandchildren; three great-grandchildren; two Step-grandchildren and several nieces, nephews and other relatives. He was preceded in death by one brother: Thomas H. Sikes; three sisters: Geneva Crews, Virginia S. Wade and Avis Wallace.
The family will receive friends Wednesday, April 8, 2015 at the funeral home from 5 until 7 PM. Funeral services will be Thursday, April 9, 2015 at 11:00 AM in Shepard Funeral Home Chapel with Rev. Thomas Williams and Rev. Gene McCullough officiating. Burial will follow in the Jacksonville National Cemetery.
Condolences may be expressed by signing the guest register at www.shepardfh.com. Arrangements are under the direction of Shepard Funeral Home, Folkston, Georgia.

To order memorial trees or send flowers to the family in memory of Vanice Sikes, please visit our flower store.