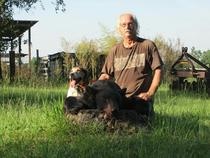 William Jackson “Jackie” Carter, 66, of Folkston, GA, passed away Thursday July 13, 2017 at his residence. He was born May 19, 1951 in Charlton County, GA to the late Alton and Lorene Carter. Jackie served his country and community in many ways.  He was a County Commissioner.  He was a lifelong, avid hunter and fisherman who enjoyed his time Volunteering with the Okefenokee Wildlife League and as a Georgia Nuisance Alligator Trapper.  He proudly served his country in the US Marine Corps where he was a Vietnam Veteran and bravely earned a Purple Heart.

Along with his parents, he was preceded in death by his sister: Althea Starling.

His commitment to his family, friends, and community did not go unnoticed. He will be greatly missed.

The family will receive friends Sunday, July 16 at Shepard-Roberson Funeral Home from 5-8 PM.
Graveside service will be held Monday, July 17 at 11:00 AM Racepond Cemetery at Sand Hill Baptist Church.

Contribution  in his memory can be made to the Okefenokee  Wildlife  League .

Condolences may be expressed by signing the guest registry at www.shepard@.com. Arrangements are
under the direction of Shepard-Roberson Funeral Home in Folkston, GA

To send flowers to the family in memory of William Carter, please visit our flower store.