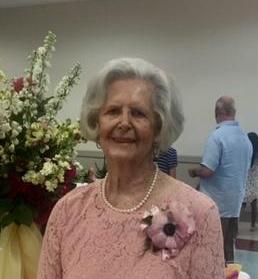 Winona Tomlinson Allen, 90, of Folkston, Georgia died Friday evening, June 21 at Satilla Hospice House surrounded by her loving family.  She was born September 11, 1928, in Lakeland, Lanier County, Georgia to the late Isbon Ben and Alice Fender Tomlinson.  She graduated from Folkston High School and lived most of her life in Folkston.  She married William Robert “Bob” Allen, Jr. on October 10, 1946.

Winona was a long time member of First Baptist Church, Folkston.  Over the years, she served in many capacities in the church.  She was also a member of the Folkston Business and Professional Women's Club, where she served as President.  During her children's school days, she was active in the Charlton County Athletic Boosters Club and the Band Boosters.  She was also a founding member of the Friends of the Charlton Public Library.

She worked in several of the many restaurants in Folkston before working for Dr. Albert Fleming at his office on First Street in Folkston.  After her marriage, she was employed by the Charlton County School Systems as lunchroom manager at Folkston Elementary School.  In 1955,Mr. Theodore Dinkins asked her to come to work in his new bank, The Peoples Bank.  Thus began her long successful career in the banking industry.  Winona began as a teller and rose through the ranks.  She retired at the end of 1992 with Bank of America as an Executive Vice President.  For many years she was the “go to” person for many residents of Charlton, Brantley, and Nassau County when they came into the bank for financial assistance.

Winona will always be remembered for her warm gracious smile and servants heart.   Her love of God and family was the central driving force in her life.  Her grandchildren, greatgrand children and many members of our community knew her as “Meme”.  She was a fantastic cook and her home was always filled with family, friends and good food. Her chicken and dumplings and cheese wafers are the gold standard and have been enjoyed by family and friends for years.  Everyone always looked for her large oval white pot of dumplings at church and family functions.  On her 79th birthday, Paula Deen crowned her as her “Queen for the Day”, an honor she cherished.  Winona was a true “Southern Lady” in all aspects of her life.  She also loved sports and was an avid fan of the Charlton County Indians, the Georgia Bulldogs and the Atlanta Braves.

Along with her parents, she is predeceased by her husband , Bob Allen, Jr., her grandson, Robert Joseph “Bart” Allen, Jr., and her siblings, Aldine and Rick Tomlinson, Betty Tomlinson Huggins and Kaye Tomlinson Ratliff.

Visitation will be Sunday June 23 at Shepard-Roberson Funeral Home, 526 Oakwood St., from 6-8 PM.  Funeral services will be Monday June 24 at First Baptist Church, Folkston GA at 11 AM.   Internment will be in Pineview Cemetery.

To order memorial trees or send flowers to the family in memory of Winona Allen, please visit our flower store.